The kick-off meeting for the L2Lifestyle Project took place on the 15th and 16th October. York Associates are the lead partners and were the hosts for our productive and engaging transnational meeting over the two days.

We had a chance to discuss all the planning aspects of the project that will be running for the next two years. I & F Education will be in charge of dissemination activities and producing marketing materials such as newsletters, leaflets, roll-up banners, posters, the Facebook Page and the new website. We have also produced a lovely logo for the project, which we hope you will like!

Foreign languages are essential for European citizens who would like to move, work, and study across the EU. Learning a foreign language is also considered an important factor to enable communication and participation in European society, as stated by EUROSTAT in it’s Foreign Language Learning Statistics from October 2017:  (http://ec.europa.eu/eurostat/statistics‑explained/index.php/foreign_language_learning_statistics) 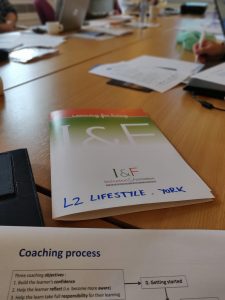 Communication in a foreign language is also one of the eight key competences recommended by the EU to the governments as a part of their lifelong learning, considering them as knowledge, skills and attitudes needed by all for personal fulfillment and development. Those competences are identified as fundamental aspects for each individual in a knowledge-based society, and communication in a foreign language includes particularly mediation skills and intercultural understanding. Thus, the European Commission helps EU countries to develop new educational tools to ensure better language skills and rewards innovation in language teaching and learning.

In 2002, the Barcelona European Council recommended that at least two foreign languages should be taught to each European citizen. Following on this, in September 2008, the European Commission adopted a Communication titled ‘ Multilingualism: an asset for Europe and a shared commitment ’ (COM(2008) 566 final), which was followed in November 2008 by a Council Resolution on a European strategy for multilingualism (2008/C 320/01). These addressed languages in the wider context of social cohesion and prosperity and focused on actions to encourage and assist citizens in acquiring language skills.

The Resolution invited the EU Member States and the European Commission to:

Bearing in mind that English is the most important second language in the European Union, the EF English Proficiency Index 2017
( https://www.ef.com.es/epi/ ) shows us that many European Countries have not yet succeeded in their goal of multilingualism. Countries like The Netherlands, Denmark and Sweden score “very high proficiency” whereas others such as Spain, Italy, France, Greece, Bulgaria and Lithuania score“moderate proficiency”, which is equivalent to a low B1 level on the CEFR. The remaining countries have scores that, in most cases, do not surpass the B1 level. The average age of the participants in the index is 26.

Two years ago, in various language schools in Málaga, Spain, it was realised by one of the partners in this project, that one of the factors limiting language learning success is that a high percentage (over 40%) of adult students, of which the majority are between 18 and 40 years old, quit their language courses early before they can reach their learning goals. These students, usually at B1 level, convert themselves into what might be termed the ‘everlasting B1 student’, with numerous restarts to their studies.

Therefore, in February 2017, this organisation started a project called “Coaching Language Learners for better results”. The programme integrated co-active coaching principles and practices into the ELT classroom with a view to motivate students and enhance the learning process and outcomes. This was applied to several groups of adults at all levels, from B1 to C1 and immediately achieved very satisfactory results. Some students who were about to quit their courses after a couple of weeks decided to continue and passed their final exams. Others, who had failed their exams several times, changed strategy and focus and passed with good grades. There have even been several students who, having always hated studying English, through coaching and focus on intrapersonal awareness and interpersonal communication topics started to love it and to continue studying even beyond their initial goal so they could reach an even higher level of linguistic and communicative competence.

Work today is increasingly transnational and being able to communicate in different languages is ,therefore, a priority for most European companies when recruiting new employees. One inhibiting factors to learning success is that new language acquisition is not a fast and effortless process. It requires many hours of specific training, practice, and demands rich, human interactions. The L2 LifeStyle focuses on developing faster and more effective language and communication raining, and wants to provide citizens not only with new language knowledge but also better communication and people skills.